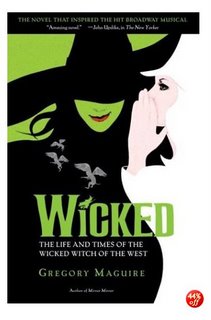 The Broadway musical Wicked–The Untold Story of the Witches of Oz, based on Gregory Maquire’s book, Wicked: The Life and Times of the Wicked Witch of the West, explores how we as a society define wickedness, not so much based on actual good and evil, but by political ideology and personal ambition. The story and the music remind me of the ex-gay movement and how far some ex-gay leaders have gone in their pursuit of their dreams.

Elphaba, who becomes known by Ozians as the very green and despised Wicked Witch of the West, actually starts her journey to “wickedness” in college as a roommate to Galinda, who later becomes known as Glinda the Good. After a rough start, they become best friends, and we see the good heart that Elphaba possesses, her longing to belong and the pain of being different along with her noble desire to help the oppressed in society (talking animals). Galinda, who initially presents as a shallow popular blonde, reveals warmth and depth as her relationship with Elphaba develops. They grow to love and care for each other deeply.

Then they part ways over a cause (the Wizard’s harsh treatment of talking animals) and through clever spins and lies by Madame Morrible, the college’s headmistress and the Wizard’s press secretary, most Ozians believe that Elphaba is actually evil and dangerous. Galinda, renamed Glinda, rises in popular and political power. She quickly finds that as she takes part in slandering her friend, Elphaba, she can acheive the dreams she always wanted. The people in power open doors for Glinda–doors of recognition, power, a celebrated romantic relationship, and popularity.

Along with the joy from all she gains, Glinda feels the inner strain of her dishonesty and betrayal. In the song Thank Goodness, Glinda reveals that getting what she always dreamed for all comes at a great cost. She sings, (If you don’t know the song, try reading they lyrics aloud)

The other day I listened to these lyrics over and over, thinking about a recent conversation with Steve Schalchlin where we discussed the Bridges Across the Divide project that sought to open dialogue between ex-gay leaders and openly queer folks (and those who support either or both). Steve shared about the early struggles but also the openness and warmth of people who have since risen to national prominence in the ex-gay hierarchy and the conservative Christian political world.

I listened to the song and thought about some of the horrible things that some these same ex-gay leaders now say about same-gender loving people, the distortion of reality, the deliberate targeting of youth, the willingness and eagerness to mix a political message soaked in fear and intolerance with their ministries. In exchange these leaders realize some of their dreams–positions of power, international press exposure, affirmed heterosexual partnerships, the support and recognition of national heterosexual church leaders and even an invitation to the White House.

But in the late hours of the night, after the warm glow of the event and the cameras dies down, do they feel a twinge of remorse over what they had to compromise yet again so that they could hold this special and precarious place at the table set before them? Do they think of the people they secretly care for and like but have to betray daily so that they can enjoy the positions they have today? Do they feel guilt because they have strayed so far from the integrity and sincerity of their early days?