Why I Care About BattleCry 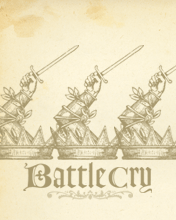 In the past few posts I criticized the Christian “youth” organization BattleCry. The biggest problem I have is that it appears to be an adult-led initiative based in fear.

Perfect love casts out fear, but in the language on BattleCry’s site and in interviews, I hear little love and lots of anxious concern–fear that today’s Christian youth will be snatched up by a dangerous, anti-God world that pushes values and ideas contrary to the Christian message of morality as understood by BattleCry’s adult leaders.

I cannot imagine how scary it can be to raise a child and to gradually lose control over the choices that child makes as s/he grows into adulthood. But in BattleCry’s manifesto I sense distrust that young people will make the right decisions.

These young people from these Evangelical Republican leaders learn that there is a war within–a deadly battle for their souls within their own souls. As a young conservative Christian, my leaders taught me that my flesh wars against God’s spirit, that my old man wages war against the new man in Christ, that left to my natural inclination, I will choose to do the wrong thing over and over again. Therefore I have to fight the good fight, work out my salvation with fear and trembling and trust not in my flesh.

If we house a war within, then we will wage a war without. We will export our inner struggles and superimpose them over the media, the school system, friendships, races, religions, nations, and anyone different from us. We will be ruled by fear of an encroaching enemy, and as a result, will not learn how to make friends with anyone outside our compound.

Young people need to know that each one of us contains something valuable within, a liquid center of goodness. A BattleCry rally repletee with military imagery, Hummers, Navy SEALs and fear-based preaching hinders us from discovering that place within, drowns out the small still voice and replaces it with the bold proclamations of the party line.

I’ve written to warn you about those who are trying to deceive you. But they’re no match for what is embedded deeply within you—Christ’s anointing, no less! You don’t need any of their so-called teaching. Christ’s anointing teaches you the truth on everything you need to know about yourself and him, uncontaminated by a single lie. Live deeply in what you were taught. (1 John 2:26,27)

« The Taliban for American Youth
Marvin and Season Finales »