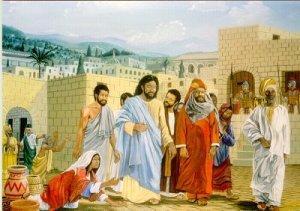 This Bible story tells about a woman with an issue of blood. Well that is how the King James Bible delicately words it. What it means is that she has a female problem. In addition to her monthly period, she continues to bleed down there. (Yes, I can say the word, but I don’t want to scare anyone away right now.)

She spends 12 years going from doctor to doctor spending all she has and she only grows worse. Not only does she suffer from a physical infirmity, but according to Leviticus 15:19-30 this woman in Jesus’ day is considered unclean. She cannot touch anyone or anything without making them unclean. She endures 12 years of misery without intimate relationships, with the stigma of being an untouchable. She has an issue of blood, but worse, she lives in a society that has an issue with blood and with women.

But then she does the unthinkable. She touches Jesus; she presses through the crowd mobbing him, and she reaches him (as illustrated in the Jerome Johnson print above). Her bleeding stops immediately, and Jesus says, “Go, in peace. Your faith has healed you.”

This story speaks to me about my own struggles to try to become heterosexual. Like that woman, I live in a society that has a problem with ME–a same-gender loving person. For us queer folks this creates a bigger problem than any of the actual issues we may face (depression, sex addiction, lust, emotional dependency, unresolved childhood abuse).

As a result, I went from place to place, minister to minister, program to program trying to fix my “problem”. I believed that if I were no longer attracted to other men, my life would be normal and my problems would go away. But like that woman in the story, I only got worse.

For 17 years, fighting a fake, society-driven problem, I lived distracted from the real issues in my life. The shame and fear I felt from society kept me locked up in a state of suspended animation, a Biblically induced coma. It wasn’t until I realized that I was not unclean that I began to address the genuine issues in my life.

Society heaps shame on that woman. Her leaders and peers mark her as “unclean”. But her faith heals her. Inside she sees the goodness, the hope, the belief that she is more than just a throwaway.

For many of us who subjected ourselves to the “ex-gay” movement and lived under oppression, we too need to reach in and find the faith to heal ourselves, to affirm ourselves and each other. And in doing so, we can begin to address the real problems plaguing us.