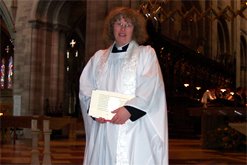 Sarah was ordained Deacon in the Church of England in July 2004. In January 2005 she hit the headlines when she was outed to a national newspaper as having made a gender change many years previously. The story was covered in many national newspapers and television stations and on web sites and blogs throughout the world

…She has the support of her Bishop and was ordained priest in September 2005 despite criticism from some conservative Christians – even on the morning of the ordination itself.

I heard Sarah Jones last Saturday at Greenbelt when she presented Changing Gender–God and Discipleship. I cannot do justice in this format to what she said and more importantly how she said it. She knew her audience–Christian, majority heterosexual, over 40 and most likely clueless about transgender issues.

With unbelievable candor mixed with a generous sprinkling of humor, she gently guided her audience through the long process of discovering her gender difference and the careful steps she took to have the outside match the inside. She also shared the challenge of being outed in the UK press as a transgender minister in the church of England.

Modest and at times self-deprecating, she skillfully knew how to give her audience the information and insight we needed so we could listen deeply to her story. She started by talking about gender and sex and the many different ways we determine someone’s sex.

She noted that sex is defined by more than what’s between someone’s legs. Sex can be demonstrated through genes, germ cells, facial and body type, hormonal differences, through the structure of the brain and so much more.

She then talked about the processes in the womb, the changes in gender when everyone starts out at conception as female then through a hormone wash and other factors that was beyond my ability to jot down in my notes, we drift towards being boy or girl.

But, she added, the process works out differently for some people. Sometimes the genitals don’t make it to the final step. There are so many steps in becoming that there is no surprise that we have variation. I know it is much more complex than this, but Sarah seemed to know just how much detail we were able to take in without overload of info. In her Q&A session afterwards, she demonstrated a keen knowledge of the scientific side of things.

In her late teens she presented as a feminine guy. Maybe gay? Not sure but she somewhat ignored the whole thing. Then in her mid-20’s she realized that the gender difference, her being different, not fully fitting in with herself, was the biggest issue in her life.

She thought, “Maybe I am a transvestite” (crossdresser). She went to a meeting of crossdressers and liked the people but knew that that wasn’t the fit for her. Maybe she was just androgynous–no gender at all or genderqueer–bit of both.

Finally she realized that she was a woman–her body just didn’t match up completely with that reality. Through a letter she came out to a friend as transgender who responded, “we knew”. She began to dress and live as a woman and found that her friends preferred her this way. Seemed right. She also received less quizzical looks in public.

But then the questions arose for her.

Is there something wrong with me? Is this an error or a part of the variation of gender? What about God? Do I have the right to change my body?

She concluded that God hadn’t made her a man.

Still she waited nine years before she got surgery and then afterwards she eventually became a priest.

All went well until a reporter called her one day pressing her to know if she had really been a man before. The media went crazy. Lots of people went crazy. But her congregation already knew her and respected her. In fact, some people came to her for help with all sorts of things because they recognized that she was someone who has been through deep times and could relate to them in their needs.

She graciously answered the reporterss questions, and fortunately she had the support of her church leaders. Even so, she shared that those were dark times, and as a result, everyone now knows her medical history.

Sarah, with some humor but also with pain, mentioned how difficult it is to find a partner as a trans woman. “There never is a really good time to tell the guy,” she said.

Also, she spoke about how costly it is to share her story, to go through that history, to break it down for an audience. She says that a few hours after a presentation like the one she shared with us, she often feels depressed for a time. But she added that that is what discipleship is all about. It can be a costly journey this giving of ourselves to others, sharing our narratives, training people to be better allies.

You can purchase a CD or a downloadable mp3 file of Sarah’s talk here.