The Lord is my Shepherd & He Might Be a Furry 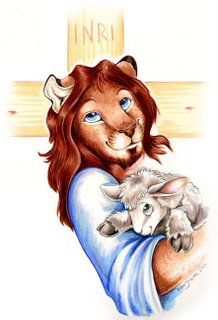 You know there is a Jesus out there for everyone. In addition to the traditional Anglo-Saxon Jesus, we can now see a film about a Black Jesus. I particularly like Chinese images of Jesus and the Jesus Buddha. We tend to create God in our own image or at one in which we can relate.

While leaving a comment on Jay’s blog, I got to thinking about Jesus as Furry. Some of you may know of people who refer to themselves as furries. According to Wikipedia,

Furry fandom is an artistic and literary genre related to the hybridization of humans and (other) animals, combining traits and characteristics, specifically in cartoons and comics.

I am no expert here, but some Furries even dress up as animals and interact at social gatherings and conventions. They also draw fan fiction and develop on-line identities and relationships.

Because of a now infamous CSI episode where they portrayed Furries as sex crazed men and women dress as animal killers, they have gotten a bad rap.

One of my former students identifies as a Furry. His parents felt concerned that he was caught up in some nutty weirdness and would end up getting himself mauled. He explained that just like any culture, you will have all types, but for many there is something innocent, fun and fulfilling in being a Furry. I asked him to share some of his thoughts.

For me at least, its about the community that it brings together. Many of the furries that I know are some of the nicest people I’ve ever met, the most kind and non-judgmental people ever. It also gives me this amazing feeling, sometimes its almost spiritual.

Sounds like the sort of feelings one would hope to experience in a church or Quaker meeting house.

But is this furry stuff all that new? And is it “un-Christian”? CS Lewis recreated the Gospel story in Narnia where he dressed up the disciples and Jesus as animals. There’s something stirring about seeing the great lion, Aslan, expressing his love and mercy and justice. Ah, and that lion’s roar! Somehow it helps me to embrace redemption that much more deeply.

In the scriptures we see God as Furry. Jesus is proclaimed the Lamb of God and many of us long for the day when the Lion shall lie down with the Lamb, a promise of peace in the world as well as reconciliation between the wrath of God and God’s mercy.

In my search today I even found a Christian Furry website. I think it helps that when we talk and think about God, if we can think outside the box. I mean no matter what image of God we conjure, what images draws us with words or pictures, they will always fall short of reality. These are simply stepping stones to help us get to the heart of the matter. Namely, you are precious, extraordinarily beautiful, and the door is open, should you wish to enter, to become a friend with God, better still family, God’s partner.