(Warning, I am in a parenthetical mood)
Ah, talk of the gay gene has been knocked about the media for some years. (No not Gene Robinson–that is the openly gay Episcipol bishop, a different sort of gay Gene)

Daniel at Ex-Gay Watch, (who btw recently gifted me with a stunning collection of Indian spices and curry packets), posted about a study that states men with older brothers are more likely to turn out gay. He then wondered how ex-gay spokespersons might respond to a possible biological link to gayness. Comments ensued including one from Peter O who explained,

This research doesn’t prove either way because the causation of the homosexuality wasn’t studied. All the research does is *observe* that younger brothers are more likely to be homosexual, but there is NO biological data to go alongside to show why.

Good point. (and where have you been Peter O? I miss your comments on this blog–oh and I am coming to the UK again soon!)

It got me thinking (and commenting) about the elusive gay gene and at least one ex-gay’s prepared reaction to it.

One of my ex-gay handlers (the director of a large ex-gay program) admitted to the group that he didn’t know if gayness was caused by nature or nurture. He stated that even if same-sex attractions were a genetic issue–a gay gene–he would still fight it (and insist that others fight too).

He then taught us that Indians (aka Native Americans, First Nation People) have a genetic disposition to alcoholism. Should they embrace their alcoholism and have drunk pride parades? No! (As opposed to drunk Pride parades)

Even though it may be biological, the natural urge to drink booze needs to be fought or it will destory the person (and the community–a slippery slope that I imagine ultimately leads to casinos).

In the same way, he concluded, if there is a gay gene, it is a BAD gene, a defect, an inborn sinful inclination that needs to be overcome–scientific proof of a sinful nature. 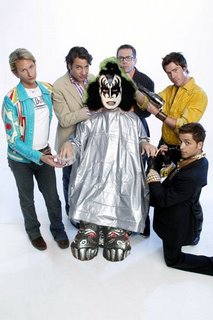 « Marvin Gets a “Christian” Job
Transgressing Gender and Native Culture »