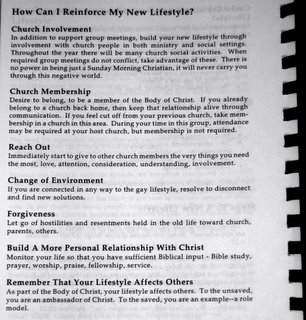 Anti-gay conservative church leaders and politicians often cry out against the GAY LIFESTYLE, that evil, self-indulgent, promiscuous, unsafe way of living which includes seducing others to join in on our ungodliness. During my 17 years in various “ex-gay” programs, when we often referred to our pre-“ex-gay” history we would say “when I was in The Lifestyle”.

Those of us who are lesbian, gay, bisexual, transsexual, transgender, queer, gender queer, same-gender loving people often feel bafflement, amusement, annoyance or anger (or a mixture of any of these) when we all get lumped into a “lifestyle” that does not define the vast majority of us.

Sure there are gay men who do illegal drugs and anonymous sex and 400 thread count sheets, but I’ve also seen Sex in the City and ads for the Girls Gone Wild videos. Do these represent the heterosexual female lifestyle?

In Love in Action (LIA), I received the 374-page Steps Out Program Class Manual (replete with an image of a studly workman on the cover), but from it I could not glean many details about the gay lifestyle. Here is the vague and confusing description from the manual:

What Do We Mean When We Say “Lifestyle”?
… Following the gay lifestyle means being involved with other gay people at various social levels. The lifestyle is quite different for gay men then it is for gay women. For gay men, it usually revolves around a gay ghetto area in an urban environment, although this is not necessarily so.

To become involved in the lifestyle means coming out of the closet to some degree. Lifestyles can be overt or covert. A gay person may be flamboyant, not caring who knows of his homosexuality, or he may be living a double life, appearing heterosexual at work and among family members and slipping away to parks or baths to engage in homosexual behavior. (Chapter 38, page 257)

(Like in most of the “ex-gay” training I received, women were barely mentioned.) The manual goes on to list reasons participants had chosen to enter the Lifestyle. Listed in order of importance they include such sinister motivations as:

The solution? A new lifestyle! According to the Program Overview, “We will seek to build a new life-style and a new identity—one based on the Word of God.”

The “Ex-Gay Lifestyle” as outline in a copy of the manual I’ve provided for you today (click on it for a larger image), explains it in detail. A big part is membership and involvement in a church. I guess not a gay church or one of those liberal franchises since the “ex-gay lifestyle” includes avoiding gay people and gay places–“The Forbidden Zone” as we termed it in LIA.

Most importantly the NEW Lifestyle includes being a role model for others–being flamboyant ex-gays. And from meeting many of the graduates who now run these programs, I see that they succeed exceedingly well in fulfilling this last expectation.

So in a nutshell, what is the “ex-gay lifestyle”? Heterosexual, non-urban (white?), conservative protestant Christian with an agenda to recruit and convert others.

Stay tuned, next week we will look at what some “ex-gays” have to say about GENDER—what fun!