I just read a post at Eugene’s Paradoxy in which, inspired by the film Crouching Tiger, Hidden Dragon, he writes about the beauty in pre-Christian China. He reveals the conflict that acknowledging this beauty can have on some types of Christians who insist that Jesus is the way, the truth and the life and NOTHING beautiful, good or spiritual can really happen apart from their God in the mix.

For the diehard fundamentalist there’s nothing to question; if the Bible seems to suggest that all of those people deserve to go to hell, then that’s simply all there is to it

He goes on to share his thoughts on the matter while still maintaining his belief in Jesus and the Gospel.

There is tremendous beauty to be found in Far Eastern cultures. The fundamentalist has no choice but to dismiss that beauty as meaningless, but I’m convinced that the God who authored beauty is honored whenever human beings strive to emulate their Creator’s creativity. Without devaluing my own beliefs I can affirm the good that I see in those who may not share my theology, and through those relationships build on my own understanding of the God I strive to know.

I commented that many Quakers have maintained the belief that that of God is already in each person regardless of their faith (or even if they have no faith). I wrote,

When we see the Other as a non-believing pagan savage ruled by the god of this world, we will always treat the Other poorly, as less than. We will war against the Other. We will take advantage of their child labor. We will discount their humanity. We will condemn them to hell. We will deny the truth that God works in their lives and is expressed through them. 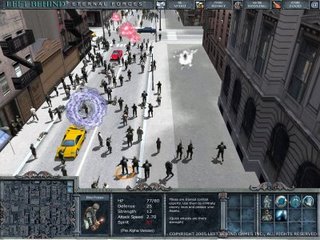 Next over at Gay Spirituality & Culture I read Convert or Die a short post by Darrell Grizzle about a new “Christian” video game that’s out in time to celebrate the birth of the Savior (no not the capitalist savior & god–Walmart, the other guy,–Jesus). Grizzle quotes the San Francisco Chronicle:

Liberal and progressive Christian groups say a new computer game [Left Behind: Eternal Forces] in which players must either convert or kill non-Christians is the wrong gift to give this holiday season and that Wal-Mart, a major video game retailer, should yank it off its shelves.

Personally, I am grateful that this game is on the market, because it reveals in stark detail the attitudes of certain types of Christians towards whom they consider “lost”.

If some are lost souls who refuse OUR GOD, then big deal if we blow them up. They are just extras in God’s giant action film. Nameless, unimportant extras. Like the extras in Iraq and Afghanistan and in Palestine and in Darfur as well as the wrong believing extras who have same-sex attractions or gender differences or simply a different kind of faith in Jesus. We’ve seen the action films; extras get exterminated.