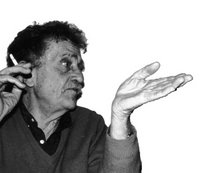 Which is a terrible thing to write since my mother currently battles lung cancer. But because of Kurt Vonnegut’s addiction to nicotine I spent five 10-15 minute private cigarette breaks with him throughout Saturday evening.

Vonnegut, in Hartford to speak alongside of fellow writers, Joyce Carol Oats and Jennifer Weiner, needed some assistance throughout the evening. As an advisory board member to the Connecticut Forum, I was asked to serve as Mr. Vonnegut’s personal valet.

In his mid-eighties, Vonnegut needed to conserve his energy throughout day’s events, which included a book signing, press conference, cocktail party, dinner, and then the two hour plus Forum event. I stuck close to his side, managed the fans that mobbed him and most importantly joined him outdoors for his smoke breaks.

Not that I smoke (my delicate vegan body would crumble from one puff of his unfiltered cigarettes) but I did not mind gulping Vonnegut’s second-hand fumes and first-hand accounts of Capote (He said that Philip Seymour Hoffman played the author exactly as Vonnegut remembered Capote from real life) and the madness of our times.

In the limo we spoke about Christianity. Mr. Vonnegut: “Jesus had some good things to say. The most radical was that he was anti-revenge which is what killed him.”

During a smoke break, joined by a young woman named Amy who flew in from California just to see Vonnegut and was resourceful enough to bum a cigarette and ask the author for his opinion of a good book to read: Mr. Vonnegut: “Voltaire’s Candide.”

He outlined a scene where Candide, with a deadly accurate Spanish rifle, enters the jungle. A beautiful naked woman runs by with a monkey biting her ass (his words). Candide shoots and kills the monkey who turns out to have been the woman’s lover. He laughed, wide mouthed and deep–deep with many messages about love and loss, prejudice and assumptions.

During our smoking breaks we talked about the Bush administration, “freedom of speech” and the blight that is humanity on the planet today. We talked about NYC and Margaret Meade (he studied as an anthropologist) and ancient people who welcomed their queer members into the community as gifts. We talked of the Nazi party and of Hemmingway with his suppressed love for men.

We spoke of the “ex-gay” movement. Mr. Vonnegut: “So does it work at all?” Sure, if the goal is to make men more “masculine” and women more “feminine” and if it is to curb certain behaviors. But no one ever becomes straight, just straight-acting.

We spoke of many things including art. Mr. Vonnegut: “Everyone needs to practice some sort of art, even if you are not very good at it. Art enlarges the soul.”

I believe he practices what he preaches. With all the profound, witty, scandalous and insightful remarks bursting out of his mouth, the most impressive thing to me was that when he spoke to me (and Amy and others he met), he really saw us, he spoke to us. He did not speak around us blowing his ideas into the atmosphere like his cigarette smoke, but he spoke to us, into our eyes, our souls. And he heard us.

“What do you do?” he asked. “I write plays, one-person shows that I perform throughout North America and Europe.” (We talked at length about The Re-Education of George W. Bush play I have been writing.) He leaned in and looked me deep in my eyes and with respect he pronounced, “You are a playwright.” Later that evening as he chatted backstage with his daughter, grandson and his grandson’s girlfriend, he introduced me as a colleague, “He is a playwright,” said with warmth, admiration and awe.

I embrace that evening as a gift (and the next day hanging out with Amy eating at the Crack Palace and learning about her amazing journey). A gift that every artist needs, a gift of how we each can grow larger, fuller, deeper and more real.

Vonnegut mused that in the wake of the backlash the tobacco companies received because of the harm caused by smoking, he wishes to write a letter complaining that after years of reading the warnings, he wants to sue them because he is still alive. And after those magical cigarette breaks with Kurt Vonnegut, I might just pen a thank you note to Phillip Morris.

(You can read Alan Bisbort’s recent interview, What Makes Your Soul Grow…and Other Observations, with Kurt Vonnegut that appeared in the Hartford Advocate.)

(Oh, and I didn’t take the photo of Vonnegut. I got it from a funky Russian language site on the author, and I couldn’t find a photo credit–my cyrillic is rusty I guess.)