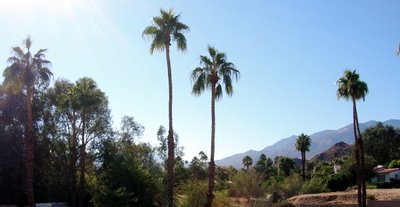 Ah, the lies we believe. Whenever I mentioned to anyone that I was going to Palm Springs, I often received a concerned look and talk about wild fires. Amazing how the news can present the myth of a city engulfed in flames because of wild fires near by. These fires are real and affect people and land, but I see and smell no evidence of them here in the city of Palm Springs.

Also, no sign of the leather crowd yet. Lots of lovely people, and I get to see Regan today (a commenter on Ex-Gay Watch who I finally met when I was in LA in June). We will talk about the sad events surrounding her friendship with and subsequent betrayal by Jemiel Terry, (which is also covered in the current issue of the Advocate magazine). Yes, gay people can do crappy things to each other.

Today’s Desert Sun newspaper has an article about the Love Breaks Out event tomorrow. Interviewing local resident, John Cooke, about his own ex-gay experiences, the following quote made me laugh out loud, particularly in light of the Ted Haggard scandal.

After more than 25 years in and out of counseling and conversion therapy to change his sexual orientation, Cooke faced a harsh reality:

“I was an Egyptian gay man. I lived in ‘De-Nile,’ ” he said with a big toothy grin

Most of the speakers and organizers will meet tonight for a pot luck. Can’t wait to see Peggy Campolo again who’s husband, Tony, just weighed in on the Haggard affair during an interview with CNN. Tony still holds to the party line in part, suggesting that “change is possible”, but he is much more realistic than most in his world about the possibility of change.

CAMPOLO: [Haggard has] said all the right things up to this point. The real question is, when he does get counsel, when he does enter into this restoration process, will he be forthcoming and honest about everything? Will he just say, I have a little problem on the side? Or will he begin to face the fact that maybe I have a sexual orientation that does not offer an easy fix.

And if he does turn out to be homosexual in his orientation, he’s going to have to live with that orientation and figure out what this means for the rest of his life, because there’s not an easy fix for that. And to suggest that a few prayers and a few spiritual things, some scripture reading, is going to solve the problem, it won’t. That’s a good beginning. But — and with God’s help, he can go beyond that. But I have to tell you, you do have to go beyond just a spiritual experience in the process of restoration.

(hat tip to Daniel “I am going to see you on Saturday” Gonzales over at Ex-Gay Watch).

I met with a group of conservative Charismatic Christians last night during a street fair. We spoke at length about same-sex attractions and the church. This morning I wrote up a bunch of thoughts that I will share later today. These are lovely people who mean well, as so many often do.

Off to get some breakfast. It is unbelievably sunny and perfectly warm, as evidenced by the photo I just shot from the balcony outside my room. (Just thought I’d rub that in for the folks in colder climates).

Ah, yes, Palm Springs in November. It is a burden I must bear in my commitment to my activism. 😉

If you are itching for more commentary and analysis on the Ted Haggard story (with audio clips!) check out Joe G.’s Beppepodcast #61 Pastor Tedd Haggard and I are now on the job market which includes Paul Hipp’s Meth and Man Ass song specially written for the Haggard affair.

Joe suggests that I be part of Haggard’s pastoral team to help sort him out. Perhaps I can do tag-team ministry with Marvin Bloom. Joe also mentions that a Pastor Tommy Barnett from Phoenix, AZ is currently on the care team.

I once knew a Rev. Tommy Barnett from Arizona who I met when he was in NYC doing some ministry. We actually shared a sofa bed together at the home of one of my church leader’s who hosted Barnett. I don’t know if this is the same Tommy Barnett, but let me just say without saying too much more, if it is the same man of God, I fear he will be of little assistance in helping someone turn away from unwanted same-sex attractions. ‘nuf said.