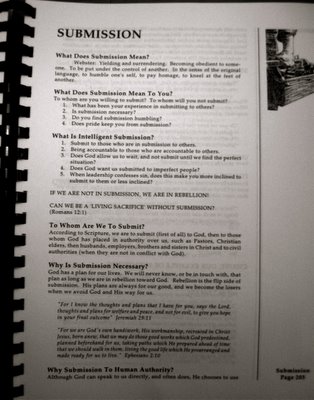 While active in the conservative church, I learned lots about submission and accountability, a surveillance and monitoring system that rivals that of Homeland Security.

My pastor always kept an eye on his flock, not only for our welfare, but also to gauge our allegiance to him and his church. By being accountable to my pastor, I regularly informed him of my struggles, foibles, sins and doubts. He knew all my business.

Since we had lived shady gay lives for so long, staff instructed us to be honest and bring our current struggles to the light during our accountability sessions. Initially I felt refreshed and relieved by the freedom of confession. Suddenly I had nothing to hide; I could bring my deepest most shameful secrets and desires to a trusted leader and receive compassion, support, advice–accountability.

Of course this leader had a leader over him to whom he reported not only his shortcomings but also all of mine. Ultimately, I learned that in the “ex-gay” movement, honesty is not the best policy. After two years of intensive dehomosexualization, I was expected to be better–less gay, less attracted to men, more in control of my urges. In some ways I was, but my carefully stitched together “ex-gay” existence barely held together no matter how much I trusted in the Lord and my spiritual leaders.

I confessed one sin too many, and I was ratted out. The chain of command issued a directive to cut me loose before I unraveled in front of everyone.

Many “ex-gay” leaders and workers, often the products of “ex-gay” programs themselves, live under this kind of constant surveillance. They carefully confess their sins one to another in an elaborate code, with the fear that the powers that be will one day find them out. Isolated in a climate of cover-up, surrounded by operatives who can turn them in, these “ex-gay” leaders fight the good fight desperate to share their struggles and questions, but terrified at the consequences.

With a word, they can be cast out of their positions, lose their most intimate relationships and their church membership only to then become prey to a gay media who often ruthlessly dives on the fallen then picks the “ex-gay” bones clean as they hold the fallen up to the spotlight.

Sometimes I think that “ex-gay” leaders must be the loneliest people on earth.

« A Late Autumn Poem for You
Transgender Identity Development Survey »