Some Words From Bayard Rustin 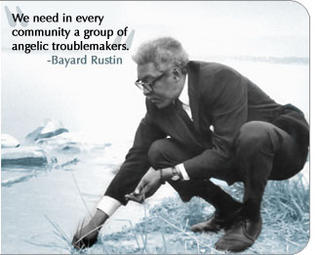 “There are four burdens, which gays, along with every other despised group, whether it is blacks following slavery and reconstruction, or Jews fearful of Germany, must address.
The first is to recognize that one must overcome fear.
The second is overcoming self-hate.
The third is overcoming self-denial.
The fourth burden is more political. It is to recognize that the job of the gay community is not to deal with extremist who would castrate us or put us on an island and drop an H-bomb on us.

The fact of the matter is that there is a small percentage of people in America who understand the true nature of the homosexual community. There is another small percentage who will never understand us. Our job is not to get those people who dislike us to love us. Nor was our aim in the civil rights movement to get prejudiced white people to love us. Our aim was to try to create the kind of America, legislatively, morally, and psychologically, such that even though some whites continued to hate us, they could not openly mainifest that hate. That’s our job today: to control the extent to which people can publicly manifest antigay sentiment.”