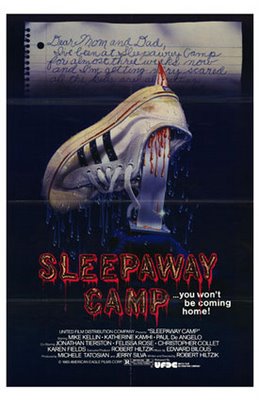 Exodus’ bold attempts to target youth remind me of a horror movie I saw during my teens.

He offers unique insight into how homosexuality personally affects individuals and the broader culture. Alan will share advice and training with youth workers at camp to teach them how to address this epidemic issue.

Going to bed with that story on my mind, I woke up repeatedly. By morning I remembered the details of Sleepaway Camp, the scariest and most shocking movie I had ever seen, particularly as a young queer kid. Plot summary of the 1983 film Sleepaway Camp:

After a horrible boating accident kills her family, Angela, a shy and sullen young girl, moves in with her eccentric aunt Martha, alongside her protective cousin Ricky. One summer, Martha sends the kids to Camp Arawak. Soon after their arrival, a series of bizarre and increasingly violent accidents begins to claim the lives of various campers. Who is the twisted individual behind these murders? The disclosure of the murderer’s identity is the most shocking climax in the history of American cinema.

Turns out, Angela is the crazed killer. But here’s the twist, Angela is really a boy, Peter, raised as a girl by her dysfunctional aunt. But that is only half of the equation that turns Peter/Angela into a blood-thristy transgender lunatic. Through a series of flashbacks, we discover what really destroyed Peter/Angela as a child. S/he walked in on her father and his lover having gay sex!

Yes, over the top, but really isn’t it the same horror movie scenario many of us pick up about ourselves hearing the stuff our opponents have to say about queer folks. They claim we come from dysfunctional families who made us sexual deviants. Left unchecked, we will live out life as sociopaths.

Young people hear the messages BEHIND the message. A minister or ex-gay leader says that that ‘the gay lifestyle” and gay people are sinful, unpleasing to God, sick, an epidemic that needs to be addressed. But many youth hear the subtext, You are flawed and unwanted. You will rot in hell. You sickos disgust me.

So Ignite Student Outreach seeks to save and sort out youth. Yet they prey on the fears of parents who think that a queer child is one of life’s worst fates. They undermine the well-being of young people by deomonizing GLBT people. They foment internal conflict and violence. They turn people against themselves and each other. In short, they write yet another horror movie script with the ultimate big bad being transgender, lesbian, bisexual and gay humans.

See for yourself Sleepaway Camp’s Shocking Surprise Ending:
[youtube=http://www.youtube.com/watch?v=qJwXSVuwhD4]
And coming to a Christian summer camp near you—Sleepway Camp 2007!