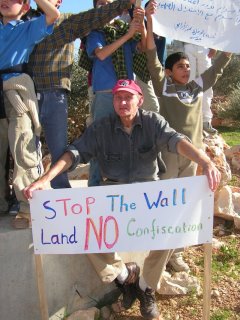 From the Hartford Friends Listserve,

Please hold in the Light the family and friends of Tom Fox, the Quaker Christian Peacemaker from Virginia whose body was just found in Iraq. Tom had been in Iraq since 2002, working on the issue of the abuse of Iraqi detainees by the US and Iraqis. He had been taken hostage in November, with three other Christian Peacemakers, who appear to still be alive.

From the Free the Captives site,

An American who was among four Christian peace activists kidnapped last year in Iraq has been killed, a State Department spokesman said Friday.

[Agence France Press-The body was found in a plastic bag on a garbage dump in west Baghdad, a witness and an interior ministry official said.

He had been handcuffed and shot. His tracksuited body had then been wrapped in a blanket and stuffed in a plastic bag.

His back showed signs of beatings and he appeared to have been killed recently, the official said.

Iraqi police found him in a vacant lot in the upscale Al-Mansur district at around 5 pm (1400 GMT) on Thursday. Seeing he was a Westerner, the patrol immediately contacted US forces who took charge of the body.]

The FBI verified that a body found in Iraq Friday morning was that of Tom Fox, 54, of Clear Brook, Va., spokesman Noel Clay said. He said he had no information on the other three captives.

Clay said additional forensics will be done in the United States. The U.S. Embassy in Baghdad is investigating, he said.

Fox’s family has been notified, Clay said, and “our heartfelt condolences go out to them.”

“The State Department continues to call for the unconditional release of all other hostages” in Iraq, the spokesman said.