Okay, so my grandmother’s funeral did not crescendo into an epic battle between the forces of good and evil. In fact, it was all quite beautiful. No talks of jewelry or portfolios, no eruptions from crusted over grudges, no swiping of family heirlooms. We laughed, we cried, it was better than Cats.

I witnessed a few stunning moments where I could not help but see glimpses of God in family members. Most notable was when my cousin C. arrived. They greeted him like a prince and showered him with kisses. Before he walked in the door, I didn’t know how the family would react to him in his orange jumpsuit with two armed police officers, his escort from the county jail to the funeral parlor. No one skipped a beat, regardless of what others outside the family might be thinking, he was warmly embraced and welcome–just like Granma would have done.

My father and his brother, Frankie, asked me to give the homily at the funeral. “You talk good,” they said. We agreed to make it an “open mic” homily, which is becoming more and more popular these days but has been a long Quaker tradition. Anyone who feels led can share something about the deceased.

The funeral service was a Roman Catholic mass, and I began by saying that after years of trying to bring me and several others back into the Catholic faith, Grandma somehow conspired to get us all to mass.

After my other remarks, which I won’t reproduce here, one by one folks came forward and talked about Grandma, Mom, Aunt Katie, or Nardina depending on how they knew her. Piece by piece her life began to form before us as each person shared her own bit. (Mostly the women folk in the family spoke.)

The priest wrapped it up by saying, “Don’t pray for Nardina; she doesn’t need your prayers.” (It is common for Catholics and some other Christians to pray for the dead in order help them successfully reach heaven.) “Instead,” he continued, “pray to Nardina because she is one of the newest saints in Heaven.” (Which I am sure the Vatican folks would protest, but they were not present).

I like that image of my grandmother–genuinely kind, loving, Christian in a way that is entirely inclusive–now always present within prayer-shot. She was everyone’s grandmother, everyone she met, and if you need her, I am sure she would be thrilled to be your grandmother too. 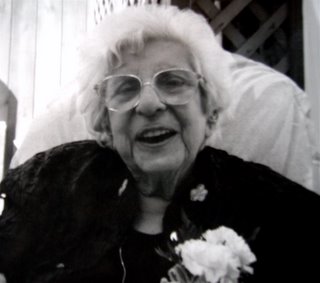