My dad, Pete Toscano is a real talker. (Actually his name is Peter, which makes me Peter’s son, but everyone just calls him Pete).

He gets cooler with age. Not only does he supply the neighborhood with bread and doughnuts, but as a U.S. Marine War veteran, he stands opposed to the War in Iraq. 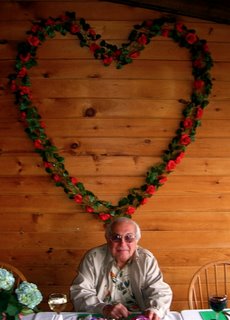 Recently I gave him Joel Andreas’ Addicted to War comic book. When he was about halfway through he said to me, “It’s a real good book and true. But I can only read a little at a time; it gets me real mad.”

On the front porch of the family home he has three flags–The US, Mexican and Canadian flags. One of his Marine buddies chidded him, “Pete, whaddya got those other flags for?” My father shot back, “Hey, they’re our neighbors!”

A long time Republican, my father disagrees strongly with Bush “It’s not right what he’s dong. He’s messing up this country.”

Perhaps one of the most poignant things my father ever said to me was when he and my mom came to Love in Action for the horrendous Famly and Friends Weekend.

After a two days of demoralizing and shaming teachings, my father summed up the experience perfectly when he turned to me, “Hey son, you have one hell of a program here. Sure last night they kicked my ass and this morning they kicked your mother’s ass.”

Of all the feedback I got that weekend, that was the only thing I heard that actually affirmed me.

« Marvin Has Two Mommies!
A Day in the Ex-Gay Field of Myths »