On the Road Once again

After a few weeks of barely leaving the house except for social reasons, I head out today by train to Philadelphia for the beginning of travel that will bring me to Washington, DC, Baltimore, MD and Vancouver, BC (that’s in Canada). After that I am off to Nashville, TN, Denver, CO, Boulder, CO, Colorado Springs, CO and Seattle, WA. You can see my full schedule here.

This weekend I will be in Glen Mills, PA at Imago Dei Metropolitan Community Church about 15 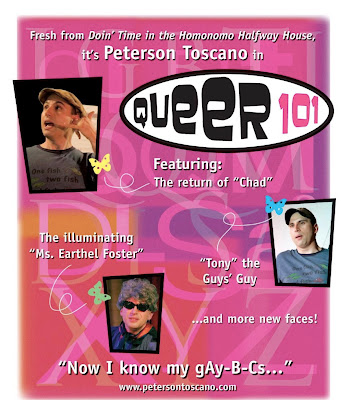 miles out of Philadelphia. Tonight (Fri) I will perform Queer 101—Now I Know My gAy,B,Cs, a play that looks at homophobia, identity and activism through the words and lives of lesbian and gay poets. I last performed this piece in April at Manchester Community College. In it I get to perform my FAVORITE scene of any of have written, the fantasy date between Chad and Federico Garcia Lorca. (Which you can see here.)

Tomorrow (Sat) I will present Transfigurations—Transgressing Gender in the Bible. This play is probably the hardest one I do requiring the most concentration and work as an actor. It also feels like the most spiritual for me. There is one moment of intimacy and vulnerability that that has taken me years to get to. Alex once asked me how writing and performing this play has changed me. It’s a profound question, and I have yet to fully grasp the impact of this piece on my own life. I guess that is what I like about art. As Kurt Vonnegut repeated often towards the end of his life, “Everyone needs to practice art because art enlarges the soul.”

On Tuesday I head to Washington, DC to perform The Re-Education of George W. Bush—No President Left Behind! How exciting to present this piece at the nation’s capital. There is a whole section about Russia with Vlad using an Russian folk pop interpretive dance to seduce Condoleezza Rice to see Russia as foreign enemy number 1. Of course when I premiered the play back in January 2007, Russia seemed much more of an ally than it is today. Vlad’s moves are working! (That and Russian aggression and a return to Cold War politics)

From what I have scheduled thus far this presentation of the Bush play will be my penultimate performance before I retire it. 🙁 I am happy that I won’t have to perform it anymore after the November election, but PLEASE don’t make me have to write a play about McCain/Palin–Bridge to No Where and Beyond! (Goodness! I already have a title) If you live in the US, register to vote.

Have a great weekend! And if you live far from all those places where I will be the next few weeks, check out Doin’ Time in the Homo No Mo Halfway House–the DVD!

« Marvin on the Airwaves
Puzzled »