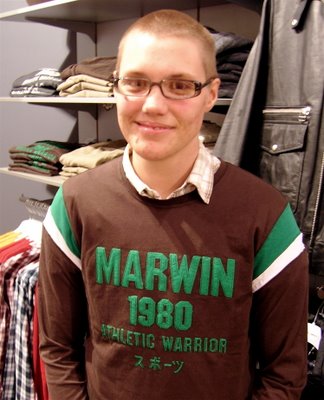 During my recent visit to Sweden I met an extraordinary gay couple–Alex and Noa. They first contacted me a year ago after they had seen Fish Can’t Fly.What a delight to meet them in person and to hear their story.

Alex, a big fan of Marvin Bloom and a regular commenter, agreed to share some of his story on this blog. He worries that his English is not good enough, but his narrative is moving and revealing. I will let Alex speak for himself.

My name is Alex. I guess an introduction is in order but I don’t really know who I am. Actually Alex isn’t really my legal name so even in my first words this starts to get a bit complicated.

I am a student, and if you ask any of my classmates who I am, you will probably hear that I am a 19-20 year old boy, well-read for my age, openly gay and that I am someone almost everybody likes but nobody knows. If you ask my mother, the picture may be somewhat different. I believe that she will tell you that I am a 27-year-old married mother of three.

It’s two different pictures and they are both quite right. I am 27 years
old according to my papers, but I have missed so much in my life that I feel like a teenager but at the other hand, I have lived through so much, so in some ways I feel more experienced than some middle aged.

I am a female to male transsexual in the middle of my transition, but mostly, I’m human, and transition isn’t something just us trans dudes get to experience. Everyone has to change; it’s a part of life and living. Transition is universal everyone has to re-experience themselves in order to grow. I have to do a lot of changes that are ordinary and some changes are more unusual.

I grew up in a very small village in Sweden at the same latitude as Alaska. My family was Pentecostal Christian and the rest of the village was “heathen”. They saw my family as very strange, and I was the weird one in my family. By then I had no words to express what was wrong with me, all I knew was that I wasn’t ok.

I saw my childhood as a waiting room with uncomfortable chairs where you don’t know if they will call your name in the next minute or in a couple of years, and that my life was not going to start until they called my name.

When puberty struck me I got more and more clues about what was wrong with me. I never heard of transsexualism, and I didn’t make any bright science realizations either. Instead I used my knowledge from Church:

I analyzed that and drew some conclusions