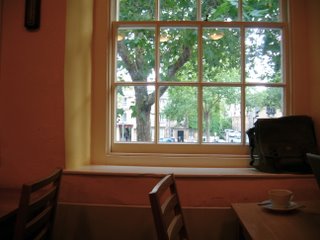 Today I feel inspired by the words of Walt Whitman,

I loafe and invite my soul,
I lean and loafe at my ease . . . . observing a spear of summer grass.

Sitting in a quiet upper room in an Oxford cafe next to the Quaker Centre, it feels good to take a breather after lots of running around.

The Courage Retreat gave me so many things to think about. Hearing people’s stories of coming out queer, as Christian, as the wife of a gay man has moved me deeply.

Over coffee this morning, one man shared that less than a year ago, at age 76, he came out after a French woman friend of his purchased him a one-day pass to a gay gym in Lyons. He knew all his life that there was something queer about him. He knew in the back of his head, but as a Christian and a married man, then a widower of 20 years who had grown up in a different world where there were no visible queer people, he did not comprehend this critical part of himself until he stepped into that gym.

Then everything suddenly made sense. The veil of his past removed, he understood why many years before he wept uncontrollably when his teenage friend moved back to Canada and why after his military service, he avoided marriage as long as possible. He understood why he pined after a long-term male friend, he even began to understand some of the subtle hints that his wife dropped at certain points in their relationship. To see him, life pulsates in him as he rides his bike across Germany, as he comes up to neighbors and vicars and daughters. He literally bursts with life and joy and adventure.

The trees of the LORD are full of sap; the cedars of Lebanon, which he hath planted;
Psalm 104: 16

So many stories. I feel honored when someone gifts me with their story.

Tonight I meet with an LGBT youth group. I think in addition to doing some excerpts from Queer 101, I will have us do The Gingerbread Person Activity. On a large piece of paper you draw a gingerbread person. Then in various parts of the body you write about yourself, your interests and lifestyles. For instance, by the ears you may list songs or bands that you enjoy. By the feet you may list music that makes you dance or causes that move you to action.

The idea is that we are NOT just idenitfied by our sexuality, gender and sexual orientation (although so often in the debate and in the media they choose to reduce us to only those idenities, and we can even do that to ourselves). But our identity and lifestyles extend far beyond who we find attractive or the gender we present.

Until Tuesday night I am staying with a Quaker couple, Marigold and Geoffrey, who have been together for 51 years and retain vibrancy in their relating and their lives. Today I have lunch with Alan from the Quaker Centre, then dinner with another Friend Sally. Quakers have a long history of hospitality and visiting, so I find it relatively easy to connect with other Quakers when I travel.

I also have some moments to myself to lean and loafe at my ease, which I will do right now in the nearby park!