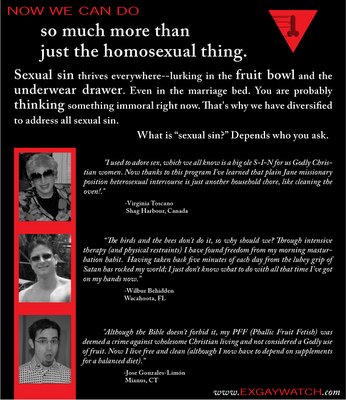 Love in Action, one of the oldest “ex-gay” ministries in the US, recently announced the launch of a new ad campaign. Upon seeing it Daniel Gonzales over at Exgay Watch thought a parody was in order. As we chatted over their ad, we noted that they may no reference whatsoever to homosexuality–just the vague term “sexual sin”.

Daniel put together this lovely infograph; I helped with the copy. Sylvia, one of my characters from Footprints in the Sand, agreed to pose for one of the pictures. And what is Wayne Besen doing with his shirt off! Clearly he’s learned nothing from undercover work in “ex-gay” programs.

(for an even larger version of the poster, vist Ex-Gay Watch, you can even download it!)