Lady Liberty & the Round Church 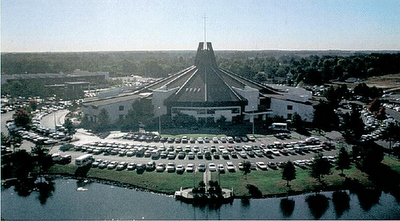 When I attended Love in Action in Memphis, TN, they forced us to worship at Central Church. At that time Central was housed in a big round structure, a vision of the then Pastor Jimmy Latimer (he has since been pushed out of his position by other church leaders and started another church–long story and a little sordid).

Now before all that Love in Action moved onto Germantown Baptist Church where John Smid became licensed as a minister Rumor has it that Jimmy Latimer would not license John at Central (at least according to one reliable source). Germantown has had its own problems with nearly a church split over the now former senior minister’s ideas of power sharing. (Church business in Memphis is more complicated than a soap opera).

Back to the round church, …upon arriving at Central Church for LIA’s Family and Friends Weekend, my dad turned to my mom, “Anita, it sure looks like a spaceship. Look out babe, but I think we’ve just been abducted!” (Which was not far from the truth)

Central Church later moved further East (they have traditionally gone along with the White Flight of Memphis’ population) and sold their facility to the World Overcomers Outreach Ministries Church. (Which when it was on Highland Ave had the most amazing sign that in the right light looked just like the Playboy logo.) 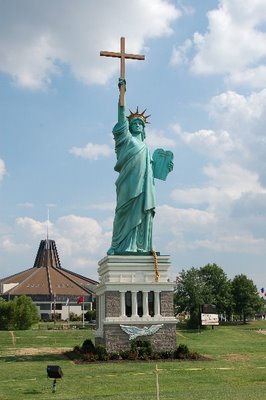 Bob Painter e-mailed me with a link to the latest addition to the church’s property, the 72 ft. tall (23 meters–5 Stories!) Statue of Liberation through Jesus Christ clutching a honking big cross. According to the New York Times, she holds the ten commandments in her other hand and the name Jehovah is written on her crown. Sort of a feminine Jesus on steroids.

Give me your poor, your tired, your huddled masses…but just for salvation. We spent all we had on this here statue. They also spend their money on full-page newspaper ads condemning homosexuality.

What does something like that cost? It’s almost as bad as Bellevue Baptist Church’s giant crosses (aka Bell-Vegas). “The center cross is 150 feet (45.75 m) tall, flanked by two 120-foot (36.5 m) crosses.” So glad that God’s dollars are going to the erection of such fine monuments in Jesus’ name.