In preparation for my 10 days in the Portland, Oregon area, I will give an interview for the radio station KBOO, Tuesday, 16 January at 9:00 PM eastern standard time (Sorry Sweden & the UK). They stream live on the web, so anyone can listen (but you need download Microsoft Media Player to listen)

On the show we will discuss some of the issues facing youth in Exodus programs along with my interactions with Exodus over the past two years since I first heard about some of these issues from BBC reporter David Akinsanya directly after he spent several days filming Love in Action.

I’m excited about this Portland trip because I will be doing pretty much everything I can do in front of a group of people (except tap dance; I need to work that in somehow).

I’ll present three different plays, including the WORLD PREMIERE of The Re-Education of George W. Bush. I will do talks for both liberal and conservative groups. I will lead a retreat for gay Christian men, meet with campus Quakers at Portland State University, perform in a gay church one night and a drag bar the next, and I will put together an event entitled Responding to the War of Terror from a Place of Non-Violence. 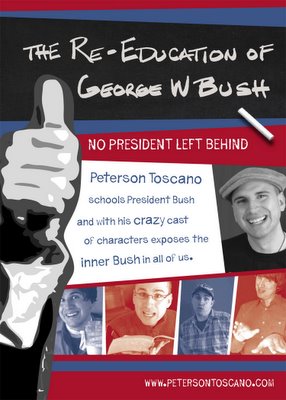 My play, The Re-Education of George W. Bush, has been slow in coming. I actually started working on it two years ago, but once my mom was diagnosed with cancer, I put it aside and spent that time and creative energy with her before she died in early September 2006. (and I am so glad I did). Throughout that time I thought, maybe I still need to learn something before I can do this play.

I will be off-line a lot (or should be) as I rehearse/rewrite and offer private workshop performances of the piece for wonderfully critical friends all this week in Hartford, CT.

« Your Concern for Youth–Now What?
Good News! »