How “Ex-Gay” Therapies Made Me More Desirable to GAYS! 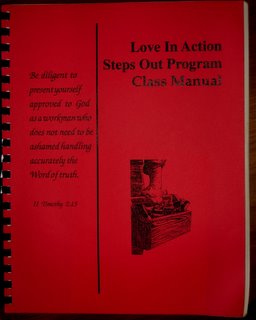 Throughout my “ex-gay” career I learned that becoming straight was not only about ceasing from sex with other guys and homosexual fantasies, but it also meant becoming “straight acting”. Welcome to the “Ex-Fem” movement.

I was a pretty nelly lad in high school. I loved the preppy fashions of the day where I could wear pastel colors with the collar up. My voice, walk and affect leaned towards the feminine.

Once I began to hang out with “ex-gays”, I received lessons on how to present myself as a white heterosexual protestant male. My pastor had written a book that revealed how gay men were often “limp wristed” and effeminate. An “ex-gay” roommate of mine coached me on how to bring the inflection of my voice down to a more masculine level.

At the beginning of my two-year stint at Love in Action (LIA), I received the Steps Out Program Manual with the front cover partial image of a manly workman firmly gripping his toolbox. In fact, this same image appears on nearly every third page of the 374-page book.

The authors instruct us to “set aside completely the world’s view point and let Jesus become your role model of manhood,” (page 129). Based on some of the mandatory activities of the programs and its rules, this meant that Jesus was a football playing, violent action film watching, change your own oil kind of guy.

Through our mentor relationships with white heterosexual married men from the church, we were each expected to observe our mentor to learn the ways of straight men. Of course many of us found our mentors to be poor communicators, emotionally detached and self-absorbed in work and golf.

Rule #14 of the program forbade “’campy’ or gay lifestyle belongings, appearances, clothing, actions or humor that might connect you to your past. (No FI’s, False Images)” This included talking like sassy black women, not because it was disrespectful to women of color. Rather it is not the way real straight white men act.

-A conservative business like haircut must be worn at all times.
-No hugging or physical touch between clients. Brief handshakes or a brief affirmative hand on a shoulder is allowed. (Exception is when observed by therapeutic accountability)
-Any physical or emotional attraction to another client or close relationship with a person of the same sex must be reported to staff.

In order to communicate with the staff, we filled out the military sounding C.O.C.’s or Chain of Command forms. According to the rules, these “forms must be concise and must not ‘story tell’ or ‘whine’. Such C.O.C.’s will be returned without a reply.”

You see according to these folks, real men don’t whine. They are not campy. They don’t have emotional relationships with other men, and they don’t hug. They do not use “flamboyant gestures”. Real men maintain professional relationships. They can change their oil and they like playing rough sports. They act more like Vin Deisel and The Rock then say Woody Allen or Johnny Depp.

What fascinates me is that according to the messages I see in mainstream white gay media and in the words and reactions of many the white gay men I meet, white gay men are expected to act much in the same masculine ways if they hope to be seen as attractive and taken seriously by others.

If you are a fem gay man, you are the brunt of the joke in the sitcoms. A fem gay can do hair and give girly advice, but does not get the man he loves. In personal ads over and over you hear loud and clear that if you are a fem man, you are not wanted. “Straight acting only. No fems!”

If you are a gay activist who happens to be fem, most likely you will be pushed to the back when it comes to public speaking and lobbying. (Much like we’ve done to trans activists for years.) We don’t want to freak out the straight world with fem acting men (and butch dyke lesbians) representing us.

Not that gay men can’t be butch. We come in all types and flavors, but like the “ex-gay” movement, we have also communicated that one’s gender presentation (masculine/ feminine) has to line up with one’s biological sex. Sadly more and more folks who don’t conform are beginning to feel pressured to consider if they actually might be transgender and not gay or lesbian.

To me, being a gay man is more than just being sexually attracted to other men. I am queer. I am man who is often feminine. In the words of a friend, another “ex-gay” survivor, it’s a side “that naturally wants to come out unless I control it”. But why control it, suppress it, MANage it? Why not consider the manly role model of the feminine Jesus who snuggled with his buddies, wore perfume, long hair and flowing robes, and most importantly valued intimate and loving relationships above all else,