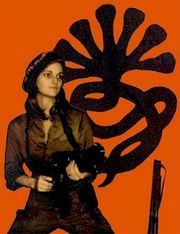 I’ve always been fascinated with Patty Hearst. Although only in third grade when Hearst, an heiress from California, was kidnapped by the Symbionese Liberation Army (SLA), I somehow became wrapped up in news stories about her. Little did I know until years later that our paths actually crossed on more than one occasion.

On April 15, 1974, she was photographed wielding an assault rifle while robbing the Sunset District branch of the Hibernia Bank in San Francisco. Later communications from her were issued under the pseudonym Tania (from the nickname of Haydée Tamara Bunke Bider) and revealed that she was committed to the goals of the SLA. A warrant was issued for her arrest and in September 1975, she was arrested in an apartment with other SLA members 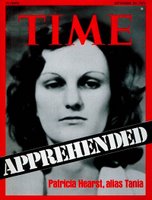 But somewhere between the time she turned terrorist and was captured, she lived as a fugitive in the New York state Catskills where I lived with my parents at Pete’s Pub, the family restaurant and bar.

About five years ago a local reporter wrote a piece about Hearst’s time in the area. It was the first I heard the story that she had only been a few miles from my home. I asked my dad if he was aware of Hearst and the SLA gang back then.

Dad: “Sure, they came into the bar a few times. They played pool, drank beer.”
Me: “Wait, Patty Heart came to Pete’s Pub when I was a kid!??!”
Dad: “Sure, they seemed like good enough kids. They didn’t make a mess or much noise. Everybody knew who they were, but you didn’t want to make waves. One time I went to their house to say hi and bring them some beer, but they acted all nervous.”
Me: “Uh, yeah, they were the most celebrated fugitives at the time. Wait, so Patty Hearst was in the same building with me when I was kid?”
Dad: “Yeah a few times.”

Which makes me wonder what other infamous folks drank beer and played pool under my childhood roof. For all I know Angela Davis could have ordered my mom’s famed Pub Burger (not suitable for vegans).

Even without knowing how close I had been to Hearst, I have always felt an affinity towards her story. It reminds me of my own capture and conversion into the “ex-gay” movement. Here I was an heiress to a vast queer fortune, and as a teen, passionate and sincere born-again Christians snatched me up.

Soon I became one of them, handing out tracts to homosexuals on NYC street corners, and picketing abortion clinics. Brandishing my Bible like a weapon, I demanded people to change, to convert, to join the movement.

When I attended Christian College in Nyack, NY, I briefly fell in love with another young man on my dorm floor. We spent many tender moments together before he transferred out. About ten years after, when I was in the midst of ex-gay therapy, he called me to reconnect. He spoke of our times together and his feelings for me.

I responded with scripture, with ex-gay theory, with admonitions to repent, with the assertion that God had changed me that he must change too. He hung up confused and weeping while I felt triumphant in overcoming “temptation”.

After a poor defense, Hearst went to jail until her sentence was commuted by then President Jimmy Carter. Years later, in his final days of office, President Bill Clinton gave her a full pardon. She now lives in Connecticut with her husband and two children. She occasionally works as an actress. 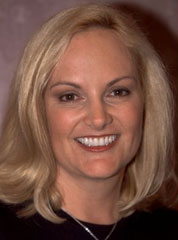 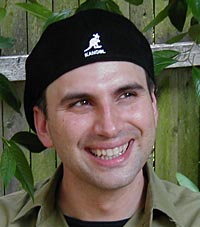 So often in the conservative church and especially in the ex-gay movement, I see the oppressed become oppressors. Perhaps it is the only way to survive while we live trapped in situations that control and so easily condemn us. Some of us miraculously break free to reclaim the queer fortunes we nearly lost, and we end up living quiet lives in Connecticut, well relatively quiet.