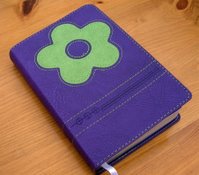 Recently I bought a snazzy looking travel-size Bible (see photo)and have begun to read through it. I’ve done it several times before, but it’s been awhile.

At the time I didn’t see just how powerful those Genesis texts can be for some people. Reading them the other day it struck me that the writer(s) of Genesis clearly wished to communicate that:

1. God created everything.
2. God affirms heterosexuality.
3. Man comes before woman
4. Woman was designed for man’s companionship and aid (marital and otherwise)
5. Man gets to rule over all of creation

Who gets to tell the story determines what gets told and how. Genesis 1 and 2 are dangerous texts, particularly for women, people with same-sex attractions and the animal population.

Looking at the texts as a literal, I can see how some people conclude that God meant for one man to be with one woman. But looking at it a little longer one can also conclude that God designed us to live in the magical Garden of Eden and to eat an exclusively vegetarian diet.

And if we take a literal view of things, in order for humans to multiply and populate the earth, they indulged in incest (Who did Eve and Adam’s children marry?) and polygamy.

And it wasn’t until the time of Adam’s grandson Enosh (at least 200 years after the garden incident) that “people first began to worship the Lord”. So what did they do before that? Was it God’s original design that people NOT worship the Lord?

Clearly people do not live according to “God’s Original Design”. We have many single adult men living alone (And the Lord God said, “It is not good for man to be alone”). People eat meat to excess and in the form of hamburger, sausage and Spam™. And we have coupling in forms other than solely heterosexual. And what about plastic products? And TV? And single moms? And Intersex folks? And Trans folks? And mega churches? And the Bible on ipod? And even the Bible itself?

« Lady Liberty & the Round Church
The Deadly Christian Agenda »