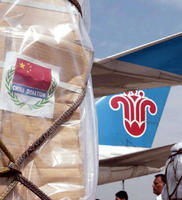 Yep, the most powerful nation on the planet even needs a little help from friends every now and then.

Since I don’t have a TV, I have not seen any of the TV news reports about Katrina and the awful conditions in New Orleans and in the Gulf Coast. My mom, who doesn’t normally comment about the news or enjoys speaking on the phone, talked for over 10 minutes about the disaster and her shock that Italy is giving aid to the US for the first time. According to a CNN report at least 94 foreign countries and organizations have offered aid to the US.

The Rueters photo (on the right) appeared in China Daily to show Relief Materials from China Heading to the US.

Matching offers of aid — from Panamanian bananas to British engineers — with needs in the devastated region is a laborious process in a disaster whose scope is unheard of in recent U.S. history, especially for a country more accustomed to giving than receiving aid.

Peter Ford of The Christian Science Monitor writes, “From Sri Lanka to France, emergency relief is sent, but tinged with criticism of US handling of the disaster.” Read more here.

Read about The View from Spain at Katrina Rage Blog, (also links to articles and op-ed pieces)

Frankly I am amazed and pleased at the foreign reaction to the disaster. After treating friends and foes like crap, (in regards to the environment, the war of terrorism, immigration, etc), we see an outpouring of support. That we need it reveals our current economic crisis, in part at least. The US government and the Bush Administration must be embarrassed by the need we have, but a little humility won’t hurt us at all.