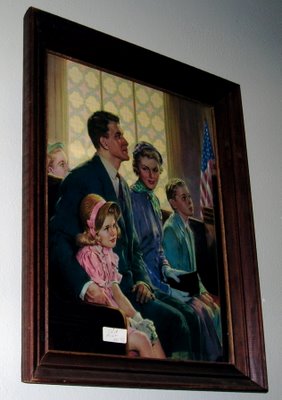 The Mark Foley sex scandal wearies me. How come I hear non-stop blather about this one sex scandal, yet in a week’s time we had THREE school shooting incidents, and I barely hear a word about them other than to see scores of photos of mourning Amish people who do not even want their photos taken? What about gun control and homeland security from our own crazed fellow citizens?

In the political arena, the Rebulicans have fashioned themselves as the party of family values. In the advertising world that is known as a marketing tool, one that has worked successfully for years.

The dream of the traditional family has been the draw for many white men who have enrolled in ex-gay programs (which mostly consists of white male leaders and participants).

Growing up in NY during the Reagan years as a gay kid in a working class Italian-American Catholic family, I would see an image of the perfect family (like the picture I photographed today while rummaging a junk store with my dad), and feel the lure of a better life–pure, wholesome, moral, American. That was the promise of the return to family values.

For all its policy implications, though, ”family values” has always had a larger meaning. It was an implicit promise to white, non-ethnic, rural or suburban-dwelling, church-going Christian moms and dads that the party would — pun intended — always do the right thing.

It was an assurance to Ward and June Cleaver that GOP was the brand name of a certain fundamental decency. Unless, it turns out, Ward and June were foolish enough to let Wally and the Beav sign up as congressional pages. In that case, kiss decency goodbye.

Pitts crafts a thoughtful piece and raises questions that need to be answered. Reading it I realize once again that the battle cry to protect the family (from gay marriage, abortion, illegal immigrants, universal health care, etc) draws on the fears of a white middle class (and those who identify with it) while ignorning the fundamental needs of all citizens.

« Exodus Takes on Celibacy
Video Clips About the Ex-Gay Movement »