I am on the Connecticut coast near Rhode Island where I just shared my “coming out” story with four groups of middle school children. The school scheduled speakers to help address issues of diveristy and conflict resolution. The two main presenters were us queer folks from Stonewall Speakers and a group of ex-convicts who spoke about violence and conflict.

These young folks asked some great questions of us. How does it feel to be gay? How do gay people think? How did you family respond to you being gay?

Peg, my speaking partner through the Stonewall Speakers, asked each group to raise their hands if they knew any lesbian, gay, transgender or bisexual individuals. Nearly every hand went up every time. In each session these 6th-8th grader spoke with knowledge and clarity about LGBT issues.

One person asked, “What is a gay stereotype that you would like to see destroyed?”
I replied, that people understand that gay activists and LGBT folks do not recruit and convert people to be same-gender loving and gender variant.

We know full well that someone cannot change sexual orientation. (Many of us tried for decades) I would never dream of imposing that on others. Rather we wish to make the world a safer place for LGBT youth and adults so that people do not feel like unwanted outsiders in their schools, places of worship and families.

I asked each of the four groups of 40 kids, “Why do you think so many queer and questioning youth commit suicide?” One student said, because they feel like they don’t belong anywhere, so they take themselves out of the world to go to another place.

Yeah, we have to change that. Even conservative Christians who believe same-gender love is an abomination have to see that it is an even greater abomination to create an environment with so much hate and rejection that young people would rather kill themselves than live in it.

These middle schoolers give me hope for real change to come.

(The photos are from Watch Hill in Rhode Island. The gentleman in red is Jim. I stayed in his home with his wife Randy–dear friends of mine. Cold and windy day but very calming all the same.click on photo for larger view) 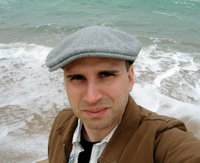 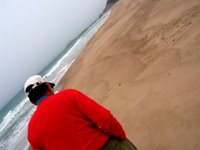