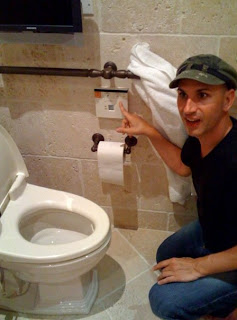 After a whirlwind adventure in Washington, DC, which included a heated toilet seat with special cleansing superpowers, I landed in Seattle, Washington with a full blown case of the cold. Fortunately I had a full two days with nothing to do but indulge in a NyQuil induced coma. I emerged 48 hours later c0ld-free but muddy in the head. One stiff cup of a Seattle soy latte cleared away the funk and gave me liquid courage to explore the city.

The Gender Odyssey Conference began today with registration and meet & greet. I saw Katie, partner to Paige, so I didn’t feel so all alone and awkward. Tomorrow I will attend a few different workshops including, one on being Genderqueer and another on Class, poverty and the trans community.

I will leave the conference right after lunch to head two hours north to Blaine, Washington near the Canadian border where I will perform at a music festival (well with some comedy thrown in).

With Tropical Storm Gustav threatening to slam into the Gulf Coast on Tuesday, I may have to change my travel plans to New Orleans. Portland anyone???

Okay, off to bed with me with visions of trans men dancing in my head…

« When You Find Out Your Husband is Gay
Homeward Bound »