On Tuesday night I present Doin’ Time in the Homo No Mo Halfway House at Sarah Lawrence , a wonderful liberal arts college in Westchester outside of NYC. It’s a beautiful campus and especially festive with it being Halloween and all.

I was concerned that no one would show up to a show on Halloween, especially when Tara from the Women’s History Graduate Department (which sponsored the event) told me that sometimes only three people show up for an event.

We had over 35 including Jed from Gay Christian Network with his friend Eduardo and also Christine who is out East this week from Colorado. Having Christine there, I asked her to talk during the Q&A session after the show to share about the lesbian experience in the Ex-Gay movement.

When I attended Love in Action, it was an all male program. Although you may see some diversity at the Exodus Conference, the vast majority of people who attend ex-gay programs are men (and usually white Protestant males).

She initially moved from the West Coast to Colorado because programs in California did not offer anything for women. She had struggled to find programs with female staff members and programming for women. Even if they did, many of the issues discussed resolved around issues that most of the men dealt with. Okay folks, today we will discuss anonymous sexual encounters in public rest rooms.

She also shared about the most damaging part of ministry for women, and that is the emphasis placed on relationships with the aim to address and eradicate unhealthy, emotionally dependent relationships, something program leaders told Christine was a common feature of lesbian relationships. 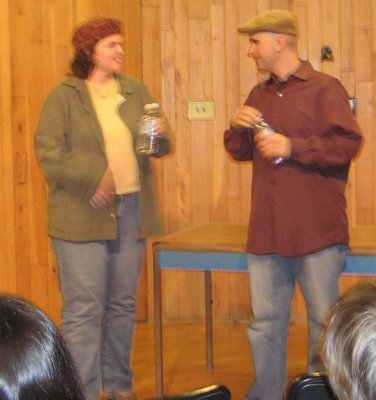 Christine said it was like a divide and conquer strategy. Separate the women, keep them from talking and relating, then they will be more open to marrying a man.

After she spoke, faculty members from the Women’s History department peppered Christine with many questions, fascinated by her experience and insight.

For over a year now Christine and I have mused about how great it would be to speak together at events. She communicates with humor, clarity and a great deal of humanity. I am so glad that we finally made it happen. Hopefully it will the first of many such events.

« Is Homosexuality Wrong?
praised to death »