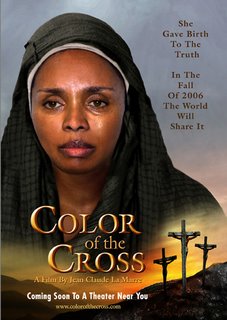 I’m in my parents’ home right now watching The Passion of the Christ with them. (I’d prefer Comedy Central). As Mel Gibson beats the snot out of Jesus, I have turned to my trusty friend, the Internet and learned about an interesting new film that is in the works–The Color of the Cross–a Hollywood Jesus film with a Black Jesus (and Mary). From the film’s wbsite—

“Color of the Cross,” an independent, biblically charged religious biopic, based on the last 48 hours of Christ’s life, stands to be the most controversial depiction of Jesus to date.

The film is unique in two distinct ways: The first dramatic film in Hollywood history ever to depict Christ as a black man. Secondly, it is the first Christian based film to inject race as a possible factor in the Crucifixion of Christ. This racial perspective to the conventional biblical story is sure to challenge Conservative Christian beliefs.

The film places racial issues front and center in this growing religious discourse that is sure to become an additional topic for debate. According to Producer, Kenneth Halsband, “When you see the black man on the cross, you are immediately reminiscent of the 1960’s… Our film hopes to heal those wounds”. The film, independently financed is currently in production and scheduled for theatrical release in fall 2006.

See the trailer for yourself.