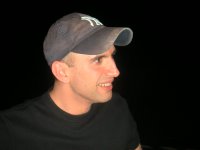 Some folks express shock that an event like Mr. Hetero can take place in liberal Massachusets. As if intolerance and religious oppression only happens in rural Southern American towns. (A common slander coming from many Northerners). Actually knuckle heads live everywhere (just as there are broad-minded thoughtful folks everywhere).

I spent 17 years seeking God to change me from my same-sex attractions, to transform me into a “man of God”. For 10 of those “ex-gay” years, I lived in New York City. Not Little Rock, AR, Huntsville, AL or Odessa, TX, but in big bad Sodom itself. In fact, during that time I met scores of men (and some women) in NYC who attempted to live as straight-acting former homosexuals.

I lived in NYC from 1985 to 1995 where I received all sorts of reparative therapy designed straighten me out. As a born-again Christian with homosexual desires, I easily found ministers and counselors in the city who helped me pursue change. In the late 1980’s I attended Life Ministries, the Manhattan-based ex-gay support group founded and run by former actors.

Dismayed at seeing many of my fellow ex-gays marry then fail in their new lives, I pursed further help at area churches and ministries where I submitted myself to counseling, “healing-prayer” and a deliverance session with an exorcist. I got so good at playing a straight character in my own life that I actually convinced others and myself that I was no longer gay.

In fall 1990 I married my dearest friend. On the same stage that premiered My Fair Lady our wedding took place at the Mark Hellenger Theater (home of Pastor David Wilkerson’s Times Square Church, my church home for much of my time in NYC). My wife and I felt hopeful that God could do anything if we only believed.

Five years later my wife and I left NYC for the mission field in Zambia. Shortly after that, (1996) our marriage ended in heartache because of my same-sex attractions. It was then, broken, desperate but still hopeful to change from being controlled by same-sex desires, I entered the Love in Action program in Memphis, TN. I worked on my issues there for nearly two years, sought the Lord with all my heart and ultimately graduated in 1998. I came OUT a few months later. I’ve been coming out ever since.

I am in NYC today, and as I visit old spots where I used to eat and watch movies, I feel like the girl in Our Town visiting ghostly places and people long gone. Except I am no ghost; I feel more solid and real than ever before.

I cannot undo all the damage I did to myself and others. By trying to be something I could never be, I hurt the people I loved the most. I pray for their healing and my own. I know that in this city today and cities all over the world, young men and women still struggle to understand their queerness, particularly in light of their faith. I pray they don’t spend decades seeking the impossible. I pray they see themselves clearly, focus on REAL issues and flee a life of fantasy for a life of truth in the inmost part.

« Straight to the Top
A Visit from Mr. Hetero Himself »