A Friend Closer Than a Brother

My family has a strange habit of adopting brothers. My dad’s closest friend since he was a small boy was Bobby. They played on the streets of the South Bronx together (when that part of NYC still had farms), they went to school together, they went to war together, and they grew old together. I only ever knew my dad’s friend as Uncle Bobby and his children were always my cousins, closer than my real cousins.

Some of you know that 2006 was very difficult for me and my family. My grandmother died right as the year started soon after my mom was diagnosed again for lung cancer. After many months of struggling and hanging on, my mom died in September. Then right before Christmas my Uncle Bobby became ill. He went into the hospital with a clot in his leg only to find out his body was riddled with cancer. He died two days later.

My dad has suffered many deep losses this year. His mother, his partner of 50 years, and his best friend since childhood–a friend closer than a brother. 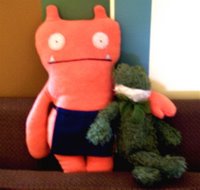 Elliot writes about a presentation he gave to his 12th grade English class on two Leslie Feinberg books he read. The teacher asked him to share what he hopes his classmates will walk away with from hearing his presentation. Elliot writes:

So I told them that I wanted them to think about how much they valued their friends, because sometimes friends can be more family than our own relatives are. I followed that by saying that, in both Stone Butch Blues and Drag King Dreams, the main characters find the place that they know they really belong with members of their Chosen Family, and, in my personal experience as a Transguy, the same has happened. The Transgender people I have encountered and become friends with have truly become my brothers and sisters, and I feel a connection with them that I have never felt with any of my biological family.

In another entry, Elliot lists some of those key friendships in his life, which reminds me of a practice I used to do every New Years. I would list all the significant people in my life. These were the people I would go out of my way to see, to pray for, to send cards to, to encourage.

Life gets crazy with school and work and chores. Elliot’s post reminds me to put into priority what really matters–people. One of my favorite saying of Jesus is Greater love has no one than this, that one would lay down one’s life for one’s friends.